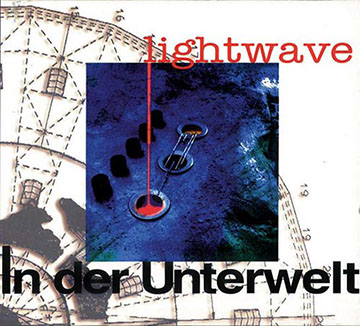 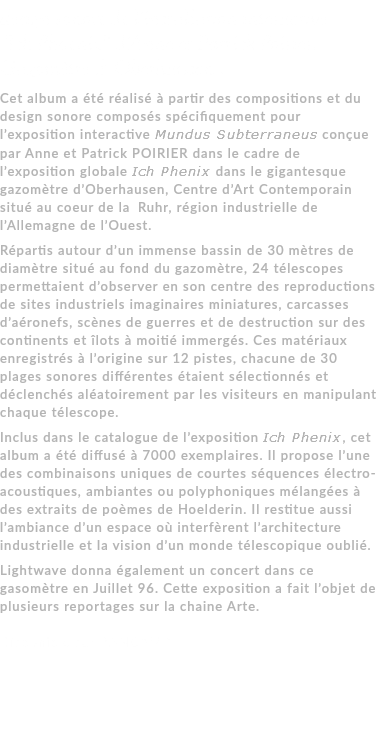 This record was made on the basis of recordings composed specifically for the interactive installation " Mundus Subterraneus " conceived by Anne and Patrick POIRIER as part of the «Ich Phoenix» exhibition in the giant Gasometer of Oberhausen, a contemporary arts center at the heart of the industrial region of West Germany.

24 telescopes situated around an immense artificial circular pond of 30 meters in diameter wich had been created on the ground floor of the Gasometer allowed the visitors to inspect in detail miniature industrial sites, ruined airports, scenes of war and of destruction on the continents and islands wich had been set up in the center of the basin and seemed half sumerged by water. These recordings, wich had been initially transferred to 12 CDs each consisting of 30 different layers of sound, were activated by the manipulation of the telescopes by the visitors walking auround the basin.

This album has been included in 7000 copies of the catalogue of the «Ich Phoenix» exhibition. It reproduces one of the millions of possible combinations of short electroacoustic sequences of ambiant music and poetry extracts from Hoelderlin wich the visitors will set into motion according to their degree of curiosity while they manipulate the different telescopes around the site. This way, it translates the ambiance of a space in wich industrial architecture and a vision of a telescopic, forgotten world interfere.